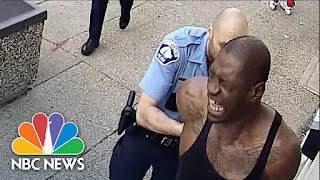 NBC News obtained over 60 minutes of security footage from a nearby restaurant showing some of the events leading up to George Floyd's arrest and eventual death. Some of the footage shows two officers arriving at the scene around 8 p.m., removing a man later identified as George Floyd from a car parked on the street, handcuffing and questioning him before eventually walking him across the street as another police car arrives. NBC News is a leading source of global news and information. Here you will find clips from NBC Nightly News, Meet The Press, and original digital videos. Subscribe to our channel for news stories, technology, politics, health, entertainment, science, business, and exclusive NBC investigations.